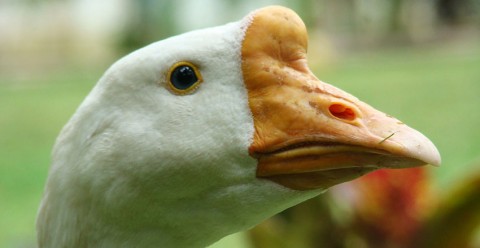 A recent newcomer to our Sanctuary is Gilbert the Goose. His is a happy ending – while many others, similar to him, starve to death or are hunted by coyotes, raccoons, stray cats and dogs – even in the confines of a city environment.

This domesticated Chinese goose was dumped at Tucson’s Reid Park and left to fend for himself. Because he had been raised and imprinted to humans, he was begging, honking, and following those folks in the park attempting to enjoy their Sunday afternoon.

Gilbert certainly had good fortune smiling down on him that Sunday, as I and one of my volunteers were on our way to represent the Avian Sanctuary at the Arizona Animal Fair held in Reid Park. We noticed this goose and knew immediately what the issue was. This creature had been raised alone and imprinted to a human. Sadly, that person had subsequently dumped this goose in the park. Gilbert did not have the instincts to fend for himself –nor could those survival instincts now be developed in this domesticated – and imprinted creature. And, his begging resulted in a very poor diet of an occasional cracker, cookie, or a few popcorn kernels tossed at him by passers-by. Dumping him at Reid Park was his death sentence.

My blog is also an opportunity to remind folks that there are laws against dumping domesticated animals in most public parks; almost every municipality and county has such a law.

Gilbert was caught and placed in my vehicle for a ride to his new home, the Forever Wild Avian Sanctuary. And yes, this goose was named “Gilbert” by one of our longstanding volunteers! Because Gilbert has been raised alone and imprinted to a human, he has never been accepted by the other Sanctuary geese –or ducks, for that matter. As he won’t integrate with other Sanctuary residents, I now call Gilbert my “feathered puppy” because he follows me around on my daily chores.

The important message is that Gilbert has taken up residency in the safety of our Sanctuary and is being provided a healthy, balanced diet.

Gilbert the Goose is one of the lucky domesticated animals that have been saved from abandonment in public places – or, worse yet, the open desert. Most suffer a much crueler fate.

Writing It Down Is Important!

Posted On November 2, 2015 ~ 0 Comments
Parrots are known for their longevity. In many instances, parrots have been companions to an owner for a considerable number of years. Unfortunately, some of…

Taking Care of Your Adopted Bird

Posted On February 20, 2016 ~ 0 Comments
With each of our parrot adoptees, the Forever Wild Avian Sanctuary provides a set of guidelines that are helpful to the owner – as well…

Shop at AmazonSmile and Our Sanctuary Benefits!

This site uses Akismet to reduce spam. Learn how your comment data is processed.