Determine whether wildlife is in real need of rescue and rehabilitation before you attempt to capture it. 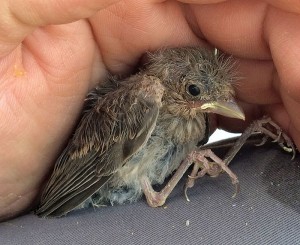 Humans are always a LAST hope for survival, never a creature’s BEST hope. Wildlife should only be removed from the wild after ALL avenues to reunite it with adults have been explored. Most wildlife does not need to be rescued!

An orphan is wildlife that is not able to care for itself and whose parents cannot be found or are known to be dead. It is natural for all juveniles to explore the world alone once they leave the nest or burrow. If you have found a healthy young animal that is able to walk and is fully furred or feathered, it probably does not need your help. Its parents are usually nearby, even if they are not visible to you.

There are basically two types of baby birds that you may encounter with different needs. On one hand, there are hatchlings, such as the Gambel’s quail chicks that are precocial, meaning that they are immediately and quickly mobile and independent from the time of birth. It takes 24 hours for a new chick to begin to eat. Because the hen lays her eggs over the course of several days, the chicks hatch over a period of time. Some hens wait around for all the eggs to hatch; others leave when the first wave of chicks has hatched –leaving orphaned chicks.

The second type of baby bird, such as a baby finch, is considered altricial, meaning that they are born with few feathers and need to be fed and cared for by the parents for a longer duration of time. When the fledglings leave their nest, this is a period of great vulnerability, as they hop around the ground and on lower branches of trees and shrubs. The parents are still feeding and looking after them, as their wings strengthen and bodies develop. One of the biggest mistakes is to think that these fledglings are orphaned and to capture them.

Squirrels will retrieve their young when they fall or wander from the nest. They also have alternative sites, if one nest is destroyed. Give the mother squirrel plenty of time to find and rescue her young. Cottontails feed their young at night and early morning. You will not find the female at her nest during the day. Rabbits leave the nest when they are just three weeks old. A small rabbit with its eyes open, ears standing up, and approximately five or more inches long is self-sufficient and does not need your help.

At Risk from Pets and Children

It is also recommended that cats be kept indoors if there are baby birds in a yard area. The toxicity of a cat’s bite or claw mark is almost always fatal to a fledgling. The same can be said for dog bites.

Another danger is hypothermia. Nestling (infant) animals need to be brooded and kept warm by their adult parent. If the young animal is along a roadway, move it to a safer location, but do not endanger yourself or others to rescue it.